Uricult culture tests are intended for diagnosing urinary tract infections (UTI) by demonstration of microbes (total bacterial count, gram-negative bacteria, enterococci, Escherichia coli) in urine samples. The test can be performed at the point of care, or the slides can be used as convenient transport media for cultured samples. 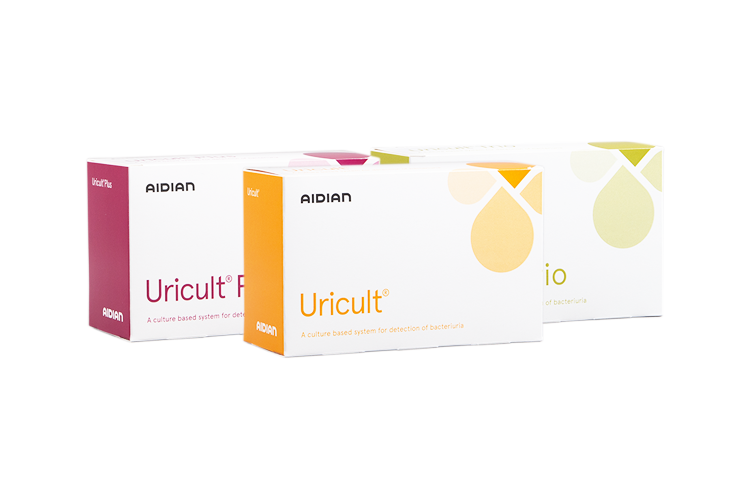 The Uricult dipslide is based on two agar media. The CLED agar is intended for determining the total bacterial count in urine samples and the selective MacConkey agar supports the growth of gram-negative bacteria.

The Uricult Plus dipslide is based on three agar media. In addition to the CLED and MacConkey agar media, Uricult Plus has a selective Enterococcus medium which is intended specifically for the detection of enterococci.

The Uricult Trio dipslide is based on three agar media. In addition to the CLED and MacConkey agar media, Uricult Trio has a selective E.coli medium which is intended specifically for the detection of gram-negative, β-glucuronidase-producing organisms, of which E. coli is the most common in urinary tract infections.

Uricult tests provide you with

Test results should never be used alone, without a complete clinical evaluation.

Urinary tract infection (UTI) is one of the most common infections caused by bacteria1. It is important to verify and treat UTI adequately since untreated UTI may cause kidney damage. Bacterial culture of an appropriately collected and handled urine sample can provide an accurate diagnosis. However, transportation of urine samples from the sample collection site to a laboratory may lead to incorrect results as bacteria may multiply if the samples are not transported correctly2.

The Uricult tests are dipslides for culturing urine samples. The slides are covered on both sides with agar media, two or three media depending on the test. The slide can be dipped into urine, or urine can be poured onto the slide. Thereafter, the inoculated slide is inserted back into the tube, making it ready for incubation or for transportation. After incubation, the presence of bacteria is evidenced by colonies growing on the agar surface. The number of colonies indicates the number of colony forming units (CFU/ml) in the urine sample because each colony is the result of multiplication of a single bacterial cell.

The total colony count on all Uricult tests is determined from the originally green CLED agar by matching the colony density with the model chart. The bacteria may be classified as lactose fermenting or non-lactose fermenting bacteria based on their appearance on CLED agar. The number of gram-negative bacteria can be determined for all Uricult tests from the originally brownish–red, selective MacConkey agar.

In the Uricult Plus test, the colourless medium is selective for enterococci. It helps to differentiate enterococci that grows in various shades of red on the medium. Also group B streptococci may grow on this medium in small colonies.

In the Uricult Trio test, the colourless chromogenic E. coli medium is selective for β-glucuronidase-producing organisms. Especially E. coli grows in various shades of brown or grey on this medium. With this combination of three different media, Uricult Trio is a highly reliable tool for the identification of E. coli directly in primary urine cultures3.

The predominant uropathogenic gram-negative bacterium that is causing 80 % of uncomplicated UTI cases is E. coli4. The other bacteria commonly causing UTIs are Staphylococcus saprophyticus (10-15 %), Klebsiella, Enterobacter, and Proteus species.

The upper part of the Uricult culture medium has shrunk by approximately 1.5 mm. Is it still usable?

You can still use the slides if the medium has not shrunk more than that.

The agars may become loose if the boxes are not handled with care and if the boxes have been dropped onto the floor. Freezing may also cause agars to fall off. If the agar has been frozen, it will typically have an "orange-like" surface. Although freezing is more likely to happen during transportation in the winter, it may also occur during summer. Storage too close to cooling systems or in a too cold refrigerator may freeze the agar.

When opening the Uricult kit I saw that the media had dried out with cracks on the surface and some were contaminated. Why does this occur?

The description above (a dry and cracked surface) strongly suggests that the slides have become frozen at some point, either during transportation or storage. Noticing contaminated slides in the same box may also be a sign of freezing as the frozen surface becomes dull and may look like it has been heavily colonised. If you notice separate colonies, it is probably due to true contamination. Contamination cannot be completely avoided because of the aseptic but not sterile manufacturing process. To avoid any contaminated slides being packed into kits, we do a visual inspection before packaging. In case of contamination, we always inspect our retain stock to see if similar problem occurs.

What are the benefits of Uricult Plus and Uricult Trio kits?

In addition to CLED and MacConkey agars, Uricult Plus and Trio contain selective agars making preliminary identification of bacteria easier. Uricult Trio contains chromogenic medium that allows E. coli, the most common cause of UTI in primary care, to grow in brown colonies. In Uricult Plus, enterococci grows on selective enterococcus medium as red colonies making the results interpretation easier.

MacConkey agar is not meant to support the growth of enterococci, although they may grow on it in pinpoint colonies. The idea behind the entorococcus agar is that it is selective and enterococci can grow on it in red colonies. Simultaneously, its selectivity prevents the growth of most other bacteria, though some Strep B strains and other antibiotic resistant bacteria may grow on it. Therefore, the morphology of the colonies should also be observed.

I received a box of Uricult today and all the bottles have pink liquid inside and a lot of small liquid bubbles on the wall of the bottle. Is that normal?

Uricult contains a lot of water in the agar. If there is a temperature fluctuation or draught, it may result in water evaporation. This can be seen as liquid in the tube and also small drops on the tube walls. The colour of the liquid is a result of the colour of the agar. It is a normal phenomenon and should not affect the use of Uricult as long as it has not resulted in drying of the agar.

Uricult has two media on it, which are these and why are they used?

Uricult is best preserved if it is stored at 7 - 25 °C. The products must not be frozen. Extra care should be taken to avoid draughts and temperature fluctuations, which may cause the agar to dry, thereby shortening the shelf-life.

Uricult Plus kits have been accidentally stored in a refrigerator at 2 - 8 °C for between one and two weeks. Can the tubes still be used? Is it possible to visually determine if they can still be used?

Uricult slides can most probably be used but the following should be checked:
If there is a lot of liquid on the bottom of the tube or if the agar has shrunk by more than 1.5 mm, the medium has probably dried and it is no longer usable. The rapid drying in the refrigerator is caused by draughts and temperature fluctuations when the door of the refrigerator is opened and closed.
In addition, the slides should not be used if the surface of the agar is cracked rather than being even and smooth. In this case, it is possible that the slides have become frozen. The cold element in the refrigerator is meant to be powerful enough to cool down the whole refrigerator. The media on Uricult slides consist mostly of water. Therefore, they are easily frozen if they are kept too close to the cold element.