Clean Card PRO for the USA

UniQ PINP for the USA

Homepage Products available in the USA Easicult for the USA

Easicult dipslide tests are intended for monitoring microbiological contamination (total bacterial count and fungi) in various industrial environments. The tests can be performed on-site and/or used as convenient transport media for samples. Using Easicult does not require any specific training, advance preparation or equipment. 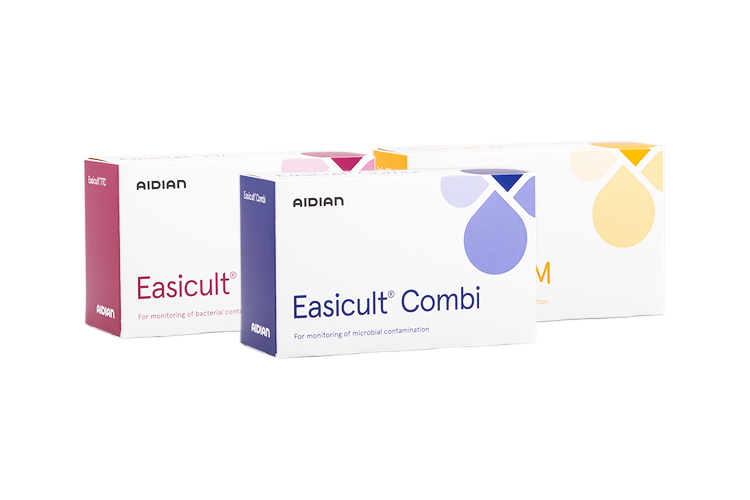 Easicult tests help to maintain high microbiological quality throughout the whole manufacturing process. They assist in optimising the correct usage of biocides and thus prolong the lifecycle of industrial process fluids, prevent clogging and/or corrosion process and process break-ups caused by microbial contamination.

Easicult tests provide you with

Easicult tests can be used to monitor cutting fluids, cooling waters, fuel and oil tanks and industrial fluids in the paper and pulp industry. The tests are also useful in the cosmetics industry, as well as in the paint and varnish industry.

Easicult TTC is covered on both sides with TTC medium which promotes the growth of the most common bacteria. It is intended for estimating total bacterial counts.

Easicult M is covered on both sides with a growth medium which promotes the growth of mould and yeasts. It is intended for monitoring fungal contamination in various industrial environments.

Both the Easicult Combi and the Easicult TTC dipslides are available in two different versions: with a polystyrene (PS) tube and with a polypropylene (PP) tube. The product with a PP tube offers its users longer stability than the PS tube. However, if the test will be exposed to altering environment conditions, the use of a PS tube is recommended because it retains less condensed water.

How do I dispose of Easicult?

Any growth on dipslides may be pathogenic. Therefore, used slides should be disposed of by burning, autoclaving or by immersion in a disinfectant overnight, always following local laws and regulations.

The ‘pink side’ is Rose-Bengal agar for the detection of yeasts and moulds. It contains antibiotics in order to inhibit the growth of bacteria. However, it is possible but rare for some bacteria to be resistant to these antibiotics.
The ‘pale side’ is TTC agar, which promotes the growth of most bacteria. The same is true for the bacterial agar. In addition, many yeasts and moulds may still appear on TTC agar which does not contain inhibitory substances. Usually, yeasts and moulds need a longer time for growing, whereas bacterial colonies appear earlier.

My test surface turned red or pink almost immediately. Do I have lots of bacteria?

No, this is most likely a chemical reaction. The TTC dye on Easicult TTC and Easicult Combi (TTC is added to the media in order to colour the colonies red) reacts when the nutrients in the media are broken down. This reaction may be caused by bacteria or even by certain chemicals. If the colour change is due to a chemical reaction, it should happen within the first 15 - 30 minutes. Also, no colonies would be visible on the test surface within that time period.

I have had results back from a laboratory but I am not sure what they mean.

Total Plate Counts, Total Viable Counts (TVCs) and Plate Counts are different terms applied to carrying out ‘Total Bacterial Counts’. A laboratory will normally report a result using numerals 1 - 10 to the power of 10. For example: 2.4 × 103, indicates that 2400 bacteria were identified per millilitre. The result from Easicult carried out on the same sample would have been interpreted as 103.

I incubated my tests for longer than 48 hours. Is this a problem?

It is acceptable to incubate the tests for 48 hours or more. In many cases this is recommended in order to allow slowly growing organisms to appear.

The kit instructions specify an incubation period of 24 - 36 hours. How long should I incubate the tests?

Some grown colonies are very large. Does this mean I have more micro-organisms?

No, the ‘dot’ or colony size is independent of the number of micro-organisms. In principle, the fewer microbes there are, the more space and nutrients are available for them which may lead to colonies larger in area. However, this is not always the case.

Does any Easicult product identify specific micro-organisms such as Legionella or other pathogens?

The identification of specific micro-organisms is more complex and usually performed only in a microbiology laboratory. Easicult dipslides are not intended for detecting specific pathogens.

Do the tests need to be incubated in the light or in the dark?

Either is acceptable because the presence of light has no impact on the test itself. However, exposure to direct sunlight should be avoided during incubation.

Some of colonies that have developed are not red on Easicult TTC agar. What does this mean?

The colonies turn red because of the reduction of the indicator dye. This dye is added in order to aid the viewing of the colonies against the test surface. Certain bacteria do not always reduce this dye which can result in an occasional colourless colony.

How should I store Easicult?

Easicult should be stored at room temperature, protected from draughts and temperature fluctuations in order to preserve the moisture content and the balance of nutrients within the agar. Avoid freezing and direct sunlight.

What is an acceptable number of bacteria for cooling water to contain?

A general guide would be 103 - 104 CFU/ml for cooling water. However, you should determine the acceptable level of bacteria for your specific system.

I have a box of Easicult which is past its expiry date. Can the tests still be used?

The Easicult tests have an expiry date printed on the side of each box. The expiry date has been determined based on real-time stability data. Easicult should be used within this date to ensure the results are reliable.